The History of Nightstands 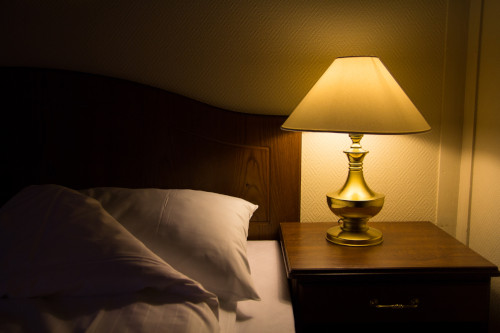 Modern nightstands are usually small bedside tables with one or more drawers or shelves. They are often used to store and display items that might be useful during the night, such as a table lamp, alarm clock, book, cell phone, pair of eyeglasses, drink, or medication. However, the original use for a nightstand might shock (or even disgust) you, so if you're reading this while you eat, maybe come back after you've finished.

Most of us have experienced waking up in the middle of the night with the sudden urge to use the bathroom. Flush toilets weren't widely used or marketed until the mid-19th century, starting in Britain and then slowly making their way across the Atlantic to the American colonies. Before indoor flush toilets became popular, you either had to hold it or make the long, dark, cold walk to the outhouse. That's where the nightstand comes in. The first recorded use of the word "nightstand" was in 1852, though the word "night table" goes back as far as 1772. The nightstand's primary function was to contain the home's chamber pot, a portable toilet that people used when they had to relieve themselves during the night.

Chamber pots were first used in Ancient Greece, at least since the 6th Century. Though indoor flush toilets came onto the scene in the mid-19th Century, chamber pots managed to stay popular until the mid-20th Century, probably because indoor flush toilets were considered a luxury for a very long time. Early nightstands were more like small cabinets than tables, containing an enclosed storage space covered by one or more doors so that storing a chamber pot was easy and convenient. These tiny cabinets sometimes went by another name, too: "commode".

The term "commode" came from the French language and was used as early as 1700. At that time, commodes sat low enough to match the height of a dado rail, a type of horizontal wall moulding that stretched around the perimeter of a room. Most French commodes were wider than they were tall, sitting on either high or low legs while occupying a prominent place in their designated room. Categories and styles of commodes were defined by their shapes, shelves, and room placement. For example, Bombé commodes had three-dimensionally shaped surfaces that featured the rococo style called Louis Quinze. Meanwhile, rectilinear neoclassical, or Louis Seize, commodes had en toupie feet in a tapering, turning shape. Some rococo and neoclassical commodes had cabinets flanking the center section, making them a commode à encoignures. Pairs of encoignures, or corner-cabinets, were designed to complement a commode and stand in the flanking corners of a room. If a commode had open shelves on each side of the main section, it was a commode à l'anglaise; if it did not have enclosing drawers, it was a commode à vantaux. Before the mid-18th century, the commode had become such a necessary piece of furniture in any home that carpenters started making them with solid painted oak, walnut, or fruitwoods with the carved decoration typical of French provincial furniture.

In the English-speaking world, "commode" passed into cabinet-makers' common parlance in London by the mid-18th century and was used to describe chests of drawers with gracefully curved fronts and occasionally shaped sides. These unique characteristics were perceived as being distinctively "French" in style. Thomas Chippendale used "French Commode Tables" to describe designs in The Cabinet-Maker and Upholsterer's Director. Not long after, Ince and Mayhew drew a "Commode Chest of drawers" in their Universal System of Household Furniture. Eventually, "commode" expanded to describe any piece of furniture with a winding front, such as a dressing table or even a chair seat. Another meaning is a washstand, a piece of furniture equipped with a basin, jug, and towel rail, often with space to store a chamber pot behind closed doors. A washstand in the bedroom predates indoor bathrooms and running water.

Because most commodes stored a chamber pot, they featured sizable doors; but, as indoor plumbing became more popular and widespread, the need to store a chamber pot vanished. That's why a lot of nightstands as we know them today have drawers instead of doors. Homeowners liked the extra storage that commodes gave, and since they didn't need to store a large pot anymore, they could store other things like clothes and knick-knacks.

Today, commodes and nightstands are two entirely separate entities with completely different functions. The word "commode" is a slang word associated with a flush toilet in the United States, especially in the South, but in Britain, it refers to a commode chair designed for people who are ill or injured and need help using the bathroom. Though commode chairs may be placed in a person's bedroom, they usually have their stands and don't need to be stored inside a sleeper's nightstand, which usually sits near the sleeper's head so that whatever they need to grab from it is easily accessible.

Today, you can find antique nightstands in just about any style, including Chippendale, French, Colonial, and Victorian. These small pieces of furniture are really helpful when it comes to tying your bedroom decor together and storing those practical items we talked about earlier. Still, you can also use nightstands creatively in other rooms for other purposes. For example, one unconventional way you could use a nightstand in your bedroom if you have a small dog, is to pick a nightstand with an open storage space at the bottom and install a pet bed inside, giving your favorite companion a spot to sleep right next to you. Or, if you're having a hard time finding the perfect accent table for your living room, you could consider using a nightstand instead. Nightstands can be used to store books, display plants, or double as a tiny desk. The possibilities are as endless as your imagination.

We hope that this brief history of nightstands has been enlightening and informative--at the very least, we hope it's made you thankful to live in a day and age where we have indoor plumbing!