The History of Desks 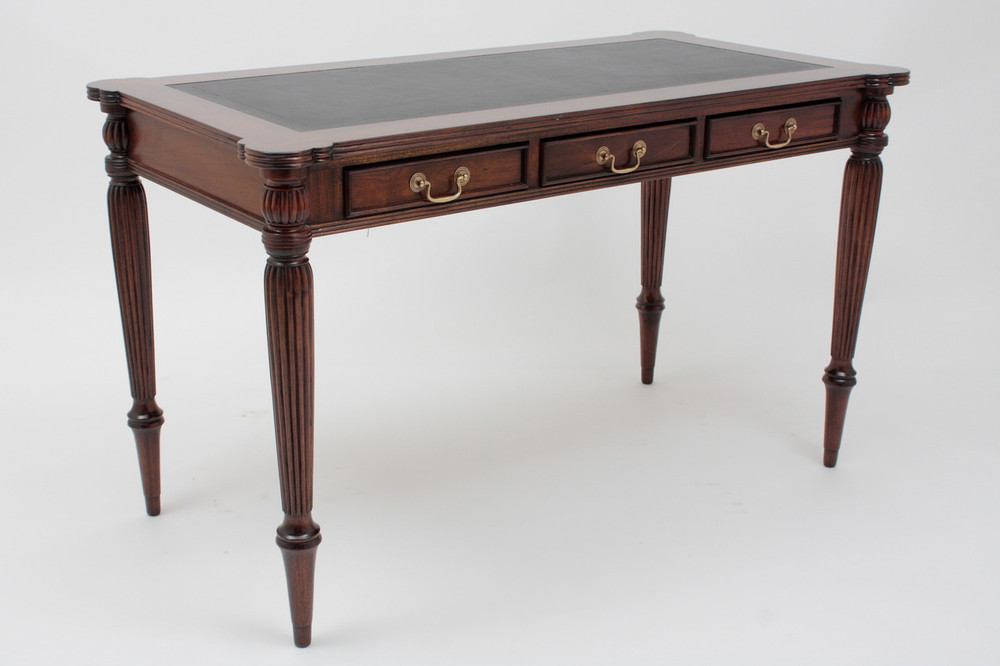 For many centuries, the term and thought behind a desk implied something portable, small, yet made large enough to store several books and important writings. The origin of the word desk is rooted in the Modern Latin word, "desca," which translates to, "table to write on," from the mid 14fh Century, and has been used as a word figuratively since 1797.

While we as humans have been writing for more than 5,000 years, no known instances of a specific piece of furniture for writing has been mentioned in ancient centers of literate civilization until the 1400s. However, 12th Century China did have furniture—such as yoke back armchairs and a table specifically assigned for painting, editing, and no doubt writing.

In the 1400s to ease the strain on the monks, of whom were primarily the source of transcribing books, Medieval illustrations begin to show the first pieces of furniture which appeared designed and created specifically for reading and writing. Slanted surfaces set upon chests or tables made it easier to read, holding up books and parchment at head height, and easier to write—as, at that time, it was most likely that anyone who could read most likely could and would also write.

Roughly at the same time, the Spanish created the Bargueño. This was a portable desk, made of two chests, the bottom of which would most likely have drawers and the top would have a hinged desk surface which also served as a side-mounted lid. The bargueño was also used as a sewing chest or a jewel chest. Sturdy iron handles along each side made transportation of this desk relatively easy. A bargueño could be set on any solid table or surface, but would often come with a ready-made, matching support for it, either a taquillón, which was a chest of drawers or a pie de Puente, a small trestle table.

The Invention of the Printing Press

As time passed, the invention of the printing press allowed reading to become more popular and more accessible than it was before. Roughly in the 1500s and 1600s, even up to the 1700s, boxes of many shapes and sizes were made, often called "Bible boxes," to hold precious books, ink, quill, paper, and valuables. The term "Bible box" is Victorian as many Bibles of that era were large and unwieldy, and a box was often needed to store them. However, these portable boxes were used well before Victorian times.

In the 17th Century, England would produce many boxes with sloping lids and a strip of wood resting at the end of the panel to prevent paper or books from falling off. They were referred to as, "writing boxes." These boxes in a sense served as a portable lectern, and over the years evolved in Colonial America in a vast array of woods, styles, and finished. It is surmised that anyone at the time that could afford wood, nails, and a hammer could improvise their very own Bible box.

The term "Bible box" however, has often been used incorrectly within the United States to qualify antique objects which are in fact, portable desks with no Biblical connection.

Most of these Bible boxes differ from portable desks, or the desk box, in that they were heavy, unwieldy, and meant to hold the family Bible and perhaps, several Bibles which were often beautiful, but heavy and very large. A portable desk or desk box was lighter, smaller, and could be easily placed in the lap for instance if no table or suitable surface were nearby.

During this time many people wished for a dedicated piece of furniture to be placed in homes that had the same advantages of the writing box, which gave rise to adding legs to the box, allowing it to sit at a proper writing height. This, in turn, made the need for a table to set a writing box down no longer needed and one did not have to hold a heavy box on their lap. However, that meant desks were no longer portable.

Desks made their way out of the privacy of homes in England when they became a necessity in newly created buildings, like the 1726 Old Admiralty Office in London. Built to handle the massive paperwork the Royal Navy generated, it included meeting spaces and the Admiralty Board Room. This building was soon swiftly followed in 1729 by the construction of the East India House on Leadenhall Street, which acted as the headquarters of the company as well as its legions of workers. With the creation of offices, this further pushed the need for innovative writing desks for both work and home.

The revolution of the steam-driven machine made possible cheaper wood-pulp paper toward the first phase of the Industrial Revolution. A sharp increase in white-collar workers and the ability to mass-produce meant large quantities of desks were available using this new, steam-powered technology.

This also triggered a sharp divide between desk manufacturers and woodworkers. The split was evident mostly in the quality of fast, cheaply made desks, and the slower, more expensive, hand-crafted desks the homes and offices of the wealthy could be afforded by master cabinetmakers.

More complex technologies meant that more specialized desks were needed to tackle these new advances. Desks such as the rolltop desk was a slatted variant of the classical cylinder desk, providing a relatively cheap and fast means to lock up the ever-increasing stack of important paperwork without having to file everything at the end of the day.

Today's trends and shifting style, ideals, and ideas have seen the creation of desks return to its roots. Beautifully crafted wooden desks made by the very same standards that the master cabinetry makers hundreds of years ago are being sought to create a lasting, memory-filled heirloom that can become part of a family tradition. These gorgeous, hand-made traditions have proven the test of time as today, these antiques are still available and, in some cases, being used to this very day. The evolution of the desk has seen many historic changes to design and style, but one thing has remained: excellence in craftsmanship.