Sofa Tables Through the Years 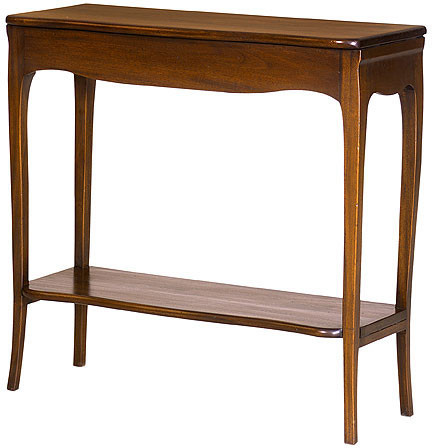 Every piece of furniture, regardless of era and style, holds a piece of history and a reflection of its time. The sofa table, also known as a console table, has had a substantial place in the history of furniture throughout the ages. These beautifully made tables are one type of side table that can be placed along the wall of virtually any room.

It is when it is placed against the back of a sofa, that the console table becomes a sofa table. Whether against the sofa or wall, these tables are designed to fit almost perfectly to a nearby surface. The sofa table is meant to complement a room by being viewed either directly at the front or the sides, which is why most sofa tables place the more intricate decorations at the front.

For instance, you will note that most sofa tables feature meticulous, hand-carved items such as palms, acanthus leaves, intricate flowers, or delicate and elaborate forelegs that can be seen along the front and sides. Yet the back, which often rests against the sofa, will be bereft of such ornamentation to fit snugly against it.

Experts in antique furniture cannot pinpoint exactly the specific beginnings of the sofa table. Evidence of its earliest existences, however, can be traced back to aristocratic mansions and palaces of the 17th century in both French and Italian furniture design.

In Rome, the sofa table began appearing in the late Baroque period such as exuberantly carved with sculptured cherubs or lions, with fanciful stretchers and pierced apron friezes. Floral sprays, wing-shaped lambrequins, and gilding were popular at the time as well. Often, these grand console tables were placed in hallways or parlors with matching mirrors.

Italy predominantly used console tables as a reflection of the height of fashion, trends, and furniture for display purposes. So many of the Italian console tables were so ornately carved they were, in fact, pieces of art and sculpture rather than furniture.

The French helped continue this fashionable trend in tables during the reign of Louis XIV. However, they reduced the front support to a pair of inward-curved legs joined by a stretcher. Like their Italian cousins, these tables were often created in pairs along with a matching mirror.

During the 17th century, sofa tables were also richly topped with rare and breathtaking marble, serving as a focal point for many rooms to display candles, art, and other rare pieces.

Eventually, as the console table design moved toward the 18th century, the design strayed away from the two-legged design as well as the common practice of brackets for support, featuring four legs instead of two. This allowed the console table to rest fully against walls or at the back of a sofa without needed additional engineering for support. While they could still be elaborate in form, functionality was slowly being introduced into these slim tables that were originally meant for décor only.

From Italy to France, and in due course, England, the idea of the console table swept the furniture world. At the beginning of its appearance in English homes, it followed the styles and trends dictated in French and Italian courts, featuring expressive carvings and winged creatures, with gilded wood or accents and masterful hand carving.

But as English carpenters and cabinetry makers began to experiment and create their styles, the design began drifting away from the ornate but featured heavy marble tabletops.

During the 1700s, these tables were rapidly becoming popular and more and more available to homes. Some of the most influential artisans crafted tables in timeless styles, such as William and Mary, Queen Anne, Chippendale, Federal (also known as Neoclassical style,) which was an early 1880s influence of George Hepplewhite and Sheraton. Cabriole gave way to simplified with various inlays which became favored over carvings.

Motifs of the early Federal period returned to Greek and Roman inspiration such as urns, circular paterae, swags or garlands, cornucopias, and columns. The forms and styles of this period looked for light elegance over opulence.

During the budding century of the 1800s, the style shifted and evolved once more away from Federal toward what is called the Classical style. This style however only flourished from 1820 to 1840, where the tables, as well as furniture, were created much larger in size. Cabinetry craftsmen focusing on undecorated, veneered surfaces drawn from French Restoration pieces. 'S' and 'C' scroll pillars were extremely popular during this short period.

The Victorian century or the era of Egyptian Revival. As the century progresses, furniture could increasingly be produced utilizing the machine. Revival styles of the 1860s and 1870s marked the first time in which fine designs were used for mass-produced furniture, including sofa tables.

Egyptian revival emerged around the time of the Civil War when American tastes drew inspiration from the Classical and Romantic periods of the past and incorporated it into their furniture. Alongside the atypical carvings, one might see a table feature obelisk, hieroglyphs, sphinxes, and even the pyramids.

Also trending in the 1850s until 1885, the Renaissance Revival was seen in many tables, and simultaneously, the Aesthetic Movement bloomed—showcasing the ideal that art was not supposed to be useful and existed for its own sake. Showcasing simple lines, natural decoration with asymmetric ornament moving further away from elaborate table designs.

Today, even in cutting-edge modern design, the influences of the past still guide the stunning works of today. Whether you prefer the antique reproduction of a half-moon table or the delicacy of a Sheraton tapered or the breath-taking intricacy of Rococo decoration, a sofa table has become an intrinsic part of a room's décor. The sofa table creates an undeniable symmetry in a space, bringing a sense of harmony through matching features or similarities to the room's design.