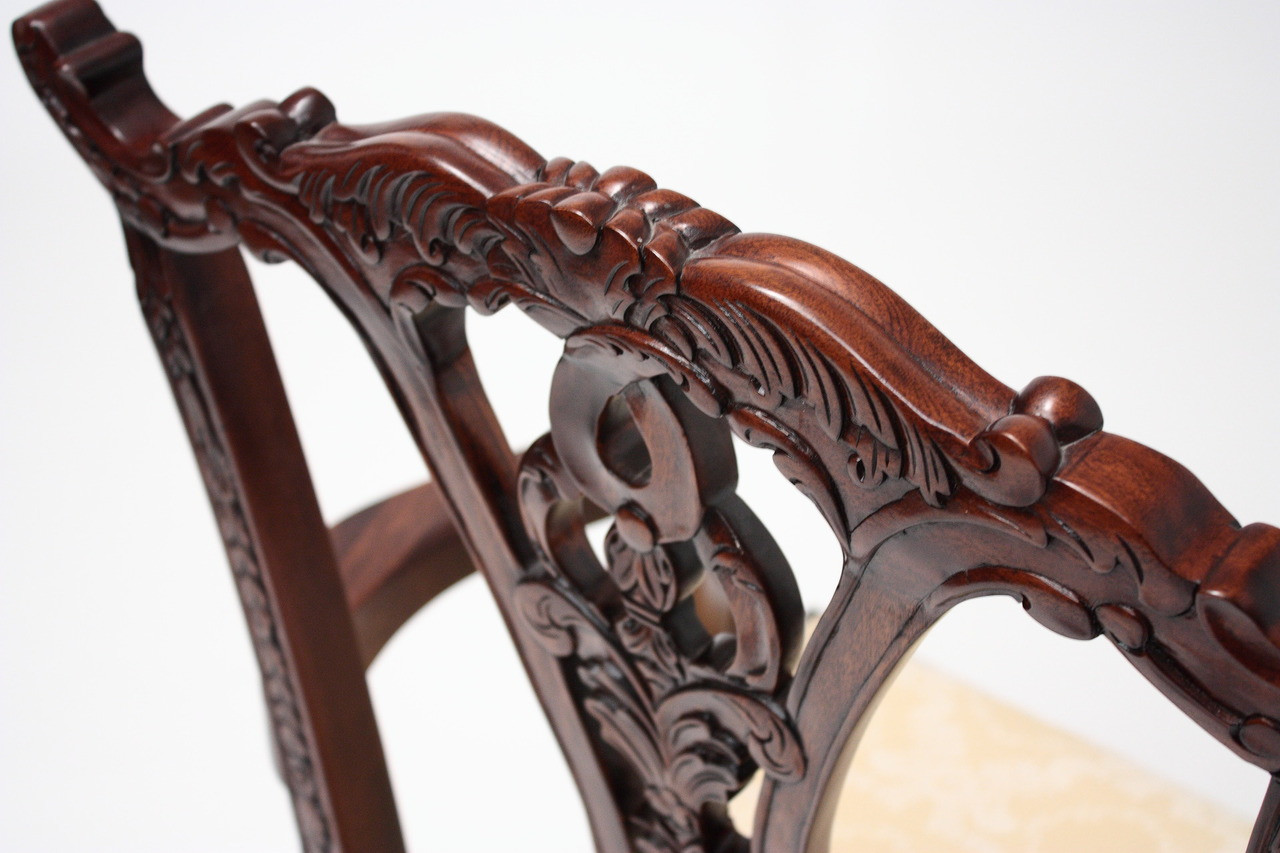 The chair is one of the most useful and can often be one of the most beautiful focal points of an elegant room. The evolution of the chair with its broad-ranging, stylistic trends as well as changes has a long-ranging, centuries-long colorful history across countries.

During the 15th century, box chairs, 'joyned cheyers,' as they were called furnished the homes of the nobility and wealthy merchants.

One of the more famous chairs that have survived this Medieval era is known as the Cathedra. With a tall back panel, the Cathedra has an exquisitely carved female figure representing St. Lucy, a venerated female saint in the martyrology and mentioned in Catholic Mass itself. She is holding two objects: a palm frond, symbolic of victory in death and a platter with eyes, a common legendary attribute.

Under the seat of the chair itself is a misericord. Since during the Medieval and early Renaissance ceremonial prayers were often spoken standing up, this Misericord often was used as a place of rest, to lean on during long ceremonies thereby allowing a bishop to obtain a type of mercy.

The Spanish Cathedra chair dates with certainty to the 1400s due to a coat of arms belonging to Bishop Alonso de Burgos, born in 1415 in Burgos, Spain, the capital of Old Castile.

The shape of the chair itself is reminiscent of many chairs of this era with hand-carved detailing at a level most box chairs did not have.

Considered the height of the Renaissance furniture period, with Italy being at the forefront in design in thanks to trade. The growing bourgeoisie was able to afford bigger and better housing, increasing the demand for higher quality furniture.

One of the more popular styles of the chair at the time of the Italian renaissance was the side chair, as styles could be particularly ornate for the wealthy or simple in sophistication. Side chairs did not have any arms, it can be unupholstered or have the back and seat padded, but always leaves the frame bare. Motifs of this time spread across the world and often consisted of carvings inspired by Roman architecture such as columns, acanthus scrolls, shells, amphoras, festoons or garlands, vases urns, and complicated interlocking geometrical patterns.

From 1640 to 1700s, American carpentry was beginning to branch out in declaring its antique style. Simply referred to as Early American Style, furniture was often made from pine, birch, cherry, maple, and oak at the time. American colonies became more settled and the need for more stable furniture solutions paved the way for a distinct style that wasn't just about practicality but showcasing skill, beauty, and elegance.

While some pieces were large and based upon styles that were popular in England at the time, there are many key differences. Common motifs on furniture at this time included florals, crescent shapes, chip-carved scrolls or leaves—Furniture from Early American Style included ornamental carvings, raised panels, finials, and woodturning. This era of woodworking is especially important as styles that would come after were directly impacted by the woodworking done during this period.

Some of the Early American Style influences can be seen in later construction of famous Windsor-backed chairs.

From 1775 to 1790, Thomas Chippendale's furniture became a household name. His innovation and detailed elegance in woodcraft would lead to his furniture becoming popular and sought-after pieces of furniture, even to this day.

The trademark of a Chippendale chair is the graceful ball and claw foot.

Victorian furniture and chairs during this era saw a revival of romance with Roman and Greek motifs as well as a merging of influences from Gothic, Rococo, and Louis XV furniture. Dark finishes and the prevalent use of rich Mahogany wood was seen in chairs created at this time. Some chairs even included gilding with heavy proportions and spacious seating. Elaborate nature carvings such as trailing vines, fruits, fleur-de-leis, ribbons and bows and sometimes even fat cherubs were a popular motif found in the woodwork of plush Victorian chairs.

Surprisingly, during the 1900s American furniture experienced a revival of two earlier beloved periods of furniture making and style: Colonial and Federal, brought back by demand. Intricate inlays and veneers, as well as shapely, skilled turnings, were seen in homes of that era to decorate straight lines.

Federal covers many different styles following the Revolutionary War rather than one specific style. Several features of a Federal chair allow it to stand out from others. The decorative arts at this time moved away from heavily ornate pieces such as the extremely carved and massive looks of Rococo inspired pieces and embraced the rising Neoclassicism.

The heart-backed chair is a stunningly sophisticated representation of the geometric forms and straight legs that swept through the country at this time. This made it instantly loved in modern antique collector circles.

Throughout six centuries, the sheer astounding craftsmanship of the masters have lasted, still echoing their timeless impact in the furniture we love today. At Laurel Crown, it is our honor and our pleasure to carry on the tradition of such historical pieces by recreating them exactly as these masters did, centuries ago. Heirloom furniture made the same attention, meticulous care and stunning details that cannot be reproduced in any factory.

For furniture that will create an unmistakable ambiance of warmth, welcome, and to showcase your remarkable style, Laurel Crown is proud to uphold the tradition of timeless beauty.