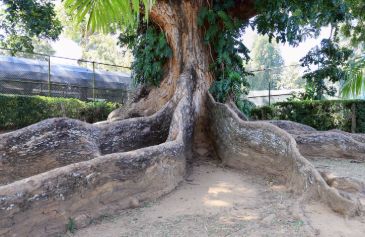 Whether you love mahogany furniture or are considering buying it for the first time, you probably want to know more about it. We will take a look at mahogany wood, where the trees grow, their ideal seasons, and more.

Mahogany is the name for three different tropical species of trees, each indigenous to the Americas. You can easily identify mahogany by its straight grain and reddish-brown timber. Honduran or big-leaf mahogany, known as Swietenia macrophylla, is the only species of mahogany currently commercially grown. This species can be found from Mexico to southern Amazonia in Brazil, making it the most widespread species of mahogany. West Indian or Cuban mahogany, known as Swietenia mahagoni, used to be the most dominant species in the mahogany trade. Since World War II, this species has not been in widespread commercial use and has since been overtaken by big-leaf mahogany. You can find this mahogany throughout southern Florida and the Caribbean. Swietenia mahagoni is a smaller species of mahogany and is often twisted. This tree grows seasonally in dry forests in Pacific Central America but has almost no use commercially.

Mahogany trees take 25 years to reach their full maturity. These trees thrive in salty air and moist soil, which is why they are so common in southern coastal areas. They require full or partial sunlight, as well as regular watering, for optimal growth conditions. Mahogany trees will lose their leaves in the spring but will grow blossoms in the late spring to early summer. A mahogany tree's blossoms can be either white or yellow-green and tend to grow in clusters on the tree. Male and female flowers will grow on the same tree and can be distinguished by the shapes of their stamens. These flowers are popular among bees and moths who will pollinate them. Eventually, woody fruit capsules will grow in. These pear-shaped, brown capsules grow to 5 inches long and are suspended from fuzzy stalks. Over time they will split, releasing seeds that will allow future mahogany trees to grow. Their roots dig deep into the earth, allowing them to stay rooted even during intense hurricanes. While mahogany trees are capable of growing to up to 200 feet tall with 20-inch leaves, it is more common to find them growing to 50 feet or less.

Typically, mahogany features a straight grain that shows the wood fibers running vertically down the length of the wood. When polished, straight grain becomes incredibly attractive to the eye. These colors and the attractive grain make mahogany furniture a popular choice for any space. Mahogany isn't just popular with consumers though. Both builders and carpenters enjoy working with mahogany for different reasons. Mahogany can season quickly, meaning the moisture content can be removed quickly, making mahogany a popular choice among builders. Mahogany is also able to cut well, making it popular among carpenters. Carpenters also like that it is possible to sand down mahogany to reveal its grain. It is also easy to glue together and can be polished to a shine.

Mahogany has a long history throughout the world. From being used within a palace in the late 1500s and being used in shipbuilding in the 1600s, to worldwide trade in the 1700s and 1800s, mahogany has had many uses throughout time. Entire colonies were devoted to the trade of mahogany, making it popular throughout empires.