How to Identify Chippendale Furniture 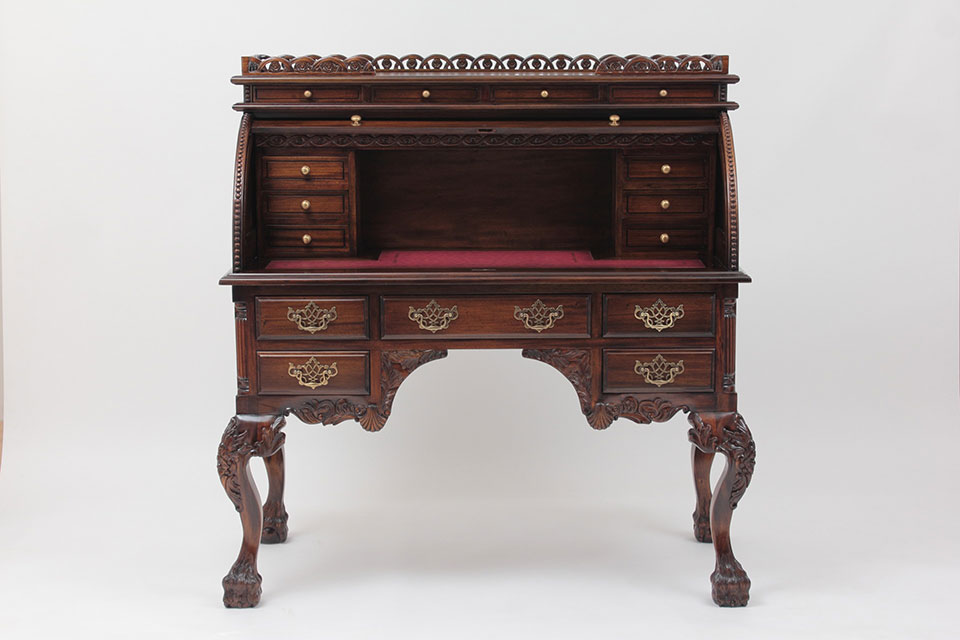 Of all the furniture styles you have likely come across in your search for antiques, Chippendale is one that you probably see quite often. Chippendale is a name that's synonymous with some of the greatest pieces produced during the 1700s, yet they are still widely esteemed and collected to this day. Knowing how to identify Chippendale furniture is not something that comes easily unless you have experience collecting antique furniture, but we can help. Laurel Crown's passion for handcrafting antique reproductions began more than 25 years ago with the Chippendale style of furniture.

What is Chippendale Furniture?

The iconic style began with a London cabinetmaker named Thomas Chippendale. He rose to fame while designing furniture in the mid-Georgian, English Rococo, and Neoclassical styles. In 1754, Chippendale published the Gentleman and Cabinet-Maker's Director, a collection of furniture designs that improved upon fashionable furniture styles and designs of the time. Publication of his detailed collection had an enormous effect on Chippendale's career and future commissions. From his catalog, wealthy patrons could choose specific elements for their furniture and Chippendale would custom make each commissioned piece in his workshop.

Chippendale's works are mainly characterized by the wood used to make them and the style of legs or feet they feature. By adapting previous and fashionable styles of the time, he inspired a wave of furniture designs that would flourish in America, where Chippendale furniture was more conservative in comparison to its English counterpart.

How to Identify Chippendale Furniture

Woods Used: The finest pieces were traditionally handcrafted from mahogany, which was imported from the West Indies. Mahogany was less brittle than soft pine yet more flexible than hard oak, and it boasts a beautiful brown hue that tends to darken over time. In the latter part of the 18th century, furniture makers began using Cuban, Dominican, and Honduran mahogany. Due to the cost and scarcity of some wood species, furniture makers often had to improvise in order to mimic the older pieces that preceded them.

American furniture makers began using cherrywood and other kinds of woods as well, such as maple and walnut. In fact, many American Chippendale pieces were made with a combination of dark woods. Veneers were seldom used in the manufacture of Chippendale furniture, and you can typically spot a Chippendale reproduction for this reason.

American furniture makers began incorporating Rococo and other influences into the pieces they made, resulting in elaborately carved legs or classically styled reeded and fluted legs. As time went on, Marlborough legs grew in popularity. Marlborough legs are typically straight, square, and substantial, sometimes made with fluted carvings and a slightly tapered shape. Legs of this type typically terminate to block feet.

Ornamentation: Pediments and finials grace the tops of many tall Chippendale pieces, but these are only some of the most recognizable forms and shapes you will find. Nodding to Chippendale's neoclassical and European influences, many pieces feature acanthus leaves, C-scrolls, ribbons, rosettes, and other decorative embellishments. Motifs also carried over from the Queen Anne style period, including scallop shells. In terms of designs that reflected the Chinoiserie or Chinese style, Chippendale-style furniture incorporates pagoda motifs, bamboo turnings, and carved latticework. Other pieces play toward Chippendale's Gothic influences, featuring fret-worked legs, pointed arches, and quatrefoils.

Knowing how to identify Chippendale furniture can be especially tricky for novice collectors, because Thomas Chippendale did not use a maker's mark on any of the pieces he made. However, the defining characteristics we have outlined in this guide will give you a good place to start when identifying Chippendale pieces. We proudly offer a wide selection of Chippendale antique reproductions that have all been carved, sanded, and finished by hand with the utmost attention to detail and authenticity. If you have any questions about this guide or would like to learn more about designing a Chippendale reproduction with the help of our custom design team, please contact us today.