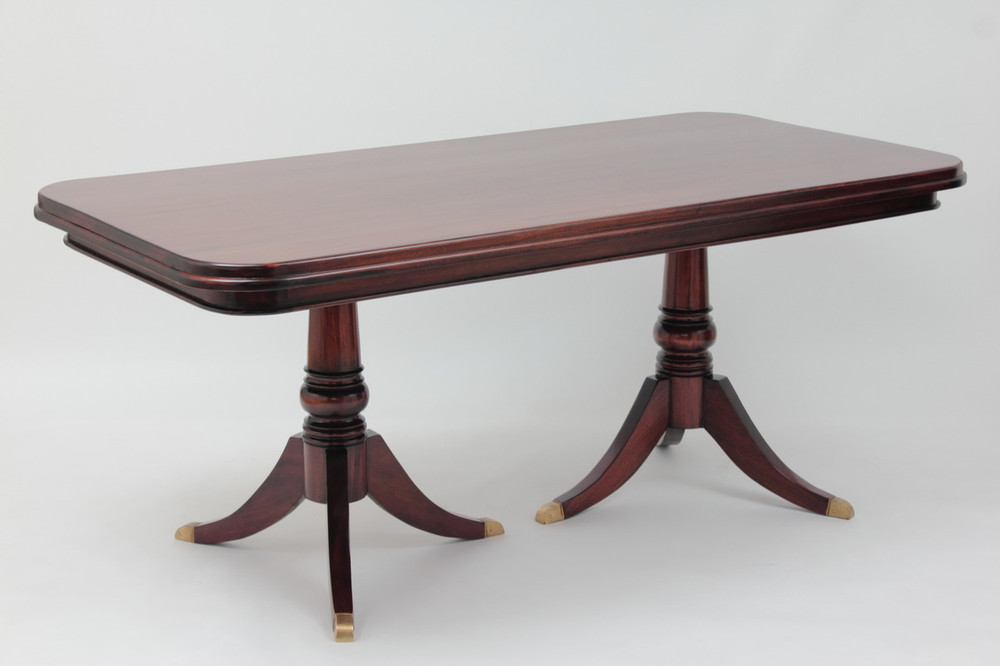 Derived from the Latin word, tabula, the dining room table was not yet part of our lives until the 16th century. The dining room table as we know it today looked much different during the 16th Century as for the longest time, there was no general set place to eat in a home.

The Greeks were believed to be the first to design rooms specifically dedicated to eating and feasting. Couches of stone or wood which at the time accommodated mostly men, while women stood by and children sat.

The earliest form of the dining room table was most likely the trestle table. These trestle tables at the time consisted of two or three trestles supports also known as trestle legs. These supports were mainly just a horizontal piece of wood fitted with four divergent legs that serve, together with at least one other trestle leg, to hold a board or several posts. These supports along with the board often formed a temporary table or desk.

In the 16th century, the trestle table gave way to newer, stronger frame-based tables that used techniques such as gateleg or the designs of refectory tables.

Refectory tables were extremely elongated tables, originally used for dining in monasteries during the Medieval era. In the late middle ages, this table gradually became a banqueting or feasting table in castles as well as other noble residences.

longated tables began appearing in homes throughout France, Italy, England, and the world. They were used for dining but also as a center table, or a library table too.

In Spain, some of the rarest castle tables from the 16th Century feature two large simplistic wooden boards and three simple carved claw legs positioned along the middle of the table. Oak was a very popular wood during this era and was often used in these early dining tables as well as their bench, stool, or chair seating.

In England, this was the time of Tudor style furniture, which was the last phase of the Gothic style and the beginning of the Renaissance. France and England during the Tudor period showcased aristocratic homes with Oak draw-leaf tables, double top surfaces made of planks, where the lower planks could be pulled out to form an extension held in place by upper planks.

Many different styles during this period were used. The trestle table and refectory tables were still in use, as well as the Tudor style, long tables with melon, or melon-bulb legs and stretchers that spanned along the four legs toward the floor. There were also experiments in combining wood and various materials—such as slate on the tops of a draw-leaf extension table.

In America, the earliest European settlers arrived with only the most basic provisions. Plentiful timber at the time made it unnecessary to ship bulky furniture items aside from storage containers. So immediately, furniture making became essential to the colonies.

During this time, furniture designs of the early Colonial period generally fall into two stylistic categories: the 17th century early Baroque or William and Mary style.

The right-angled, mortise and tenon construction of the 17th-century style furniture became distinctive in the Dutch and English-speaking colonies of early Americas. There were no doubt hundreds of woodworkers at the time, yet only a handful can be precisely identified today.

Surprisingly, the William and Mary style did not quite catch on in the homes of those in the port cities of the Colonies, and by 1720, that style of dining room tables and furniture went out of favor.

Two prominent styles were introduced after the fall of the William and Mary style and became synonymous with Americana antiques: the solid, beautiful serpentine outlines and naturalistic carvings of the Queen Anne style and beloved Chippendale took the forefront of dining room table styles until the end of the 18th Century.

In this century we see a bloom of breathtaking antique styles.

The century of massive changes and massive leaps of technological advances. Communications became widely available and transportation became faster. This century can be considered the transition period into the world we know today.

Industrial growth was massive and wide-spreading, where furniture could be mass-produced at a faster rate than hand joined and hand-carved. Most of the styles and designs of this period were a response and a reflection of the industrialization, and while some of them embraced the new reality, others captured inspiration and styles of the past in new interpretations.

Many distinguishing styles erupted onto the scene of American dining room tables and around the world. A few of the most distinct styles of tables you would find during this century:

While styles and trends do come and go often, what makes it a prized antique style in dining room tables, as well as furniture, is its ability to remain elegant, beautiful, and versatile with any décor. Many antique styles throughout the years have made a resurgence in homes across the globe for these exact purposes.

The 21st Century is returning to the appreciation of hand-made, hand-carved, and hand-finished furniture pieces, as furniture pieces—including some from the 16th century—have remained and stood the test of centuries. The longing for heirloom quality, stunningly unique pieces that can withstand time and grow more beautiful each year has brought some of the most beloved antiques and antique reproduction styles to the forefront of trends once again.