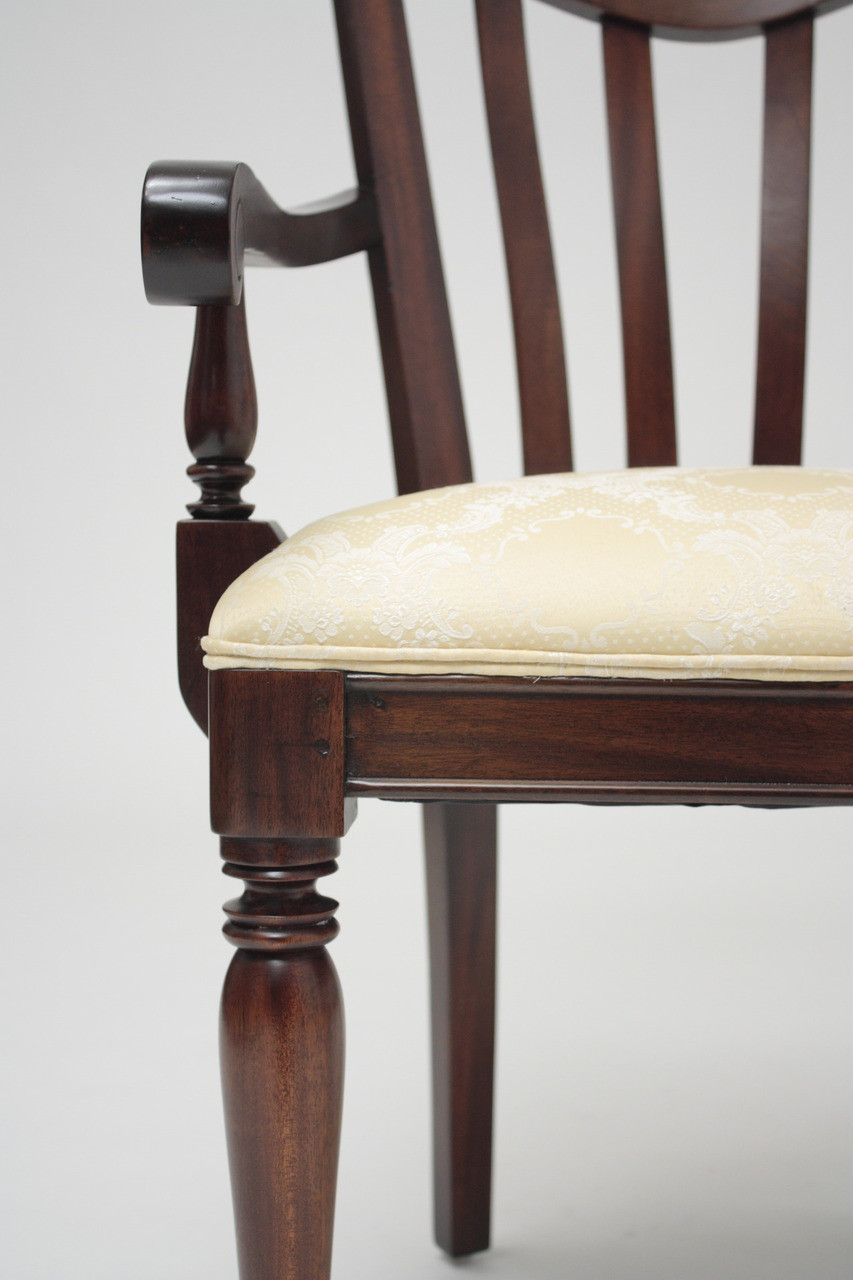 In Central Europe between 1815 and 1848, an era of the middle class grew. Arts at that time began to appeal to not just the nobility but common sensibilities. Influential German styles of furniture design evolved, extending into Scandinavia and beyond. Emphasis was shifting from sumptuously large statement furniture pieces to clean lines and minimalist, tasteful ornamentation.

Biedermeier furniture also progressed into more ornamentation as it grew, as the middle class began to celebrate newfound wealth as well as growth after the Napoleonic Wars.

French Empire style soon made way to the Biedermeier style which features functional, simpler forms no less beautiful than their previous ornamental successors.

Around 1830 is when we see craftsmen begin the incorporation of simple carvings: sphinx, swans, lions paws, acanthus leaves, and lyres for example.

Some artisans would embellish Biedermeier with gold paint rather than gilding while others would add bronze appliques reminiscent of those found on Empire pieces, while others also added stamped brass wreaths or stars.

While the name, Biedermeier originated on a derogatory caricature, "Papa Biedermeier," poking fun at middle-class comforts, such comfort emphasizes family life and private activities in the home, especially letter writing—giving rise to the secretary desk and pursuit of hobbies.

Furniture in this style reaches a remarkable level of simplicity while remaining unquestionably sophisticated in any setting, true to this day. Style-wise, Biedermeier softened the rigidity the Empire style had become known for while mirroring the delicacy of Directoire.

Surfaces in this style of furniture are modulated with natural grains, knotholes left with accents meant to contrast and modest inlay occasionally used. One of the key features you can see in most Biedermeier is the stunning, yet restrained use of geometric motifs.

Some furniture pieces during the beginning of the Biedermeier era took on new roles. For example, a middle table often used for decoration purposes soon transformed into a family table around which chairs were set for evening activities.

Biedermeier furniture during its 1800s era moved away from using dark wood. Light, native woods that were locally sourced and available were more affordable at the time instead of mahogany. Many authentic pieces in this time made use of:

These were often stained or finished to mimic rare and more costly wood and materials.

This historic style of furniture was so beloved that even though the later years, it was eventually more romanticized in further adding ornamentation than its usual when first seen in 1815. Much later, it saw a second revival in the 1960s. That revival has essentially lead to cementing the Biedermeier style of furniture into the category of one of the most popular and timeless styles of antiques.

It is the flat, often unadorned, visual delicacy with playful as well as whimsical geometries of Biedermeier pieces that makes them still feel as though they are modern. Many Biedermeier antiques can easily add to a more modern, minimalist room today. Echos of this style can be seen in both Art Deco as well as Art Nouveau, and a few Biedermeier pieces can still look quite at home due to the contrast of light and dark wood within an Art Deco interior.

No other period previously has produced such a thrilling array of different seating than the Biedermeier era, as myriads of the basic scheme of four legs, a seat, and a back was experimented with for the needs of so many different homes. Upholstery for chairs could range from simple horsehair to brilliantly colored velvets, silks, and calico. Pleated fabrics were also a popular choice for seating as well as for walls, ceilings, and alcoves.

Since Biedermeier had such a comforting, subtle elegance to it, many families felt the freedom to use this style of furniture to create less formal arrangements—no less beautiful—but more comforting. Middle-class homes became using Biedermeier furniture in their styles or commissioning a unique custom made piece to better fit into their lifestyle and home décor. Thanks to the era of Biedermeier, the concept of interior design would soon follow.

Sitting areas in family homes most often featured furniture such as Biedermeier armchairs, couches, loveseats, letter writing desks, round tables, a mirror or a display cabinet.

When it comes to a singular designer that made the largest impact on the Biedermeier era, Josef Dannhauser must be mentioned.

He owned a factory in Vienna beginning around 1804, employing at its height 350 workers who made furniture, sculptures and home décor. While he did make exclusive pieces for the Austrian royal family in addition to crafting Empire style, he made many pieces for the middle-class as well. Although Dannahauser produced an immense body of work during his life, after his passing and his son took over the factory until 1838, he signed very few pieces that still exist and are discovered today.

Thankfully, roughly 2,500 of his drawings, as well as printed catalogs, have been preserved to help antique collectors attribute and recreate his looks.

For over 3 decades Laurel Crown has been committed to the creation of exacting, meticulous reproductions of the most beloved antique styles. From our first passion, the Chippendale style, to our ever-expanding expertise including Biedermeier. When crafting furniture, we must do so in the same manner the master craftsmen of the time, did. Everything is hand made and hand-picked, from the mahogany wood, the mortise and tenon joints, the sanding, choosing the right stain and perfecting the finish.

Should you have a treasured antique Biedermeier at home and are looking to reproduce it, or perhaps pair it with another, then we are more than happy to do so. Our reproductions are so well-crafted that customers often remark they have difficulties telling the authentic from the production apart.

For any questions, you may have, or to seek out the advice of our courteous and friendly professionals, feel free to contact our customer service. It would be our pleasure to find or recreate the right Biedermeier piece truly perfect for you and your home.